As escapism from corporate banality turned the corner in the ‘90s, a new generation of vibrant, software generated soundscapes emerged. Communal access to the internet propagated the new hive mind of ideas online, giving way to smoother, stress-free textures. The PC revolution opened the
gateway to ray-traced playgrounds of color and light, allowing for visions of utopic proportions to manifest themselves on screensavers far and wide. Boot up your machine, load the software on this floppy diskette, and drop out of a reality bounded by the physical laws of the universe. 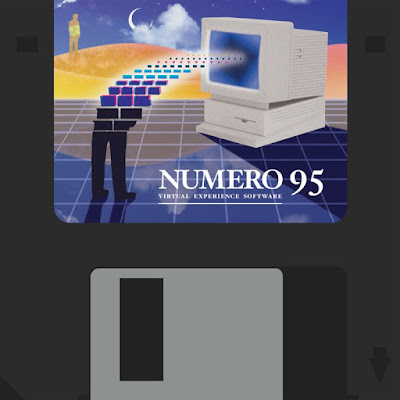 Numero 95 [Virtual Experience Software  is the soundtrack to the screen saver fever dream we’re all trying to climb back into. Eight droplets of proto-vaporwave, synthesized in vinyl (or digital) form, fresh from Numero’s archive of forgotten sounds. Are you looking for that half way point between smooth jazz and new age? Mac and PC? Quantum Leap and the X-Files? This software is for you.
Housed in a replica floppy diskette, Numero 95 explores an early computer music unbound by scene or region. Eight solo pioneers vibing out at home in their headphones, traveling as far as the sound card would allow. This is music that barely escaped the hard drive and yet percolates at the edges of the algorithm 30 years later. Welcome to Numero 95
TRACK LISTING
Program A:
Quiet Force - Listen to the Music
Barry Coates - Hovercraft
Andrew Gordon - Walking the Lonely Streets
Steve Bach - Rain Dance
Program B:
Angelo Vanotti - Sketches of Anderland
Robert Slap & Steve Powell - Sex Drive
Jordan De La Sierra/Nimbu-Pani - The Lemon Water Song
Jessie Allen Cooper - In My Heart
at May 08, 2021
Email ThisBlogThis!Share to TwitterShare to FacebookShare to Pinterest
Newer Post Older Post Home