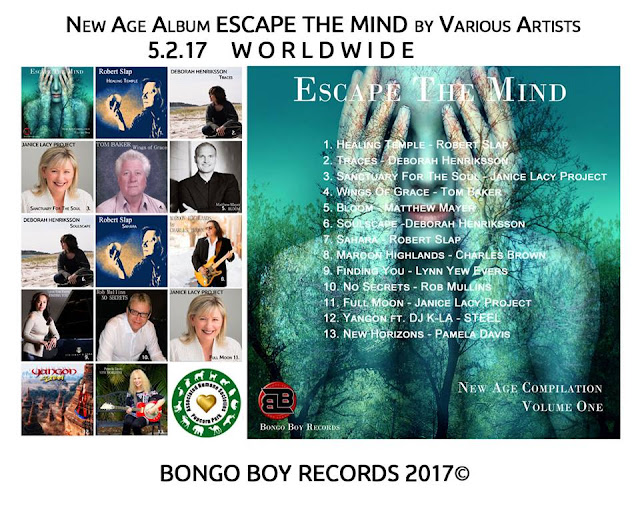 I have 2 tunes on this new Bongo Boy release, "Healing Temple" and "Sahara" The album will feature an incredible group of artists, each with their own unique sound. I hope you will give us all a listen!!!!

Healing Temple:
An ethereal, musical exploration into ancient healing techniques used on Atlantis during the enlightened period. The Elders (aka; the healers) were telepathically connected, with advanced healing powers using color, light, sound and vibrations, mentally focusing their power through crystals. The Healing Temple was the spiritual center of Atlantis, and it is believed the “OM” (highest spiritual sound of the universe) was first heard here.

Sahara
This tune conjures up images of journeying across the desert in a caravan, searching for that hidden oasis across the vast expanse of the Sahara. 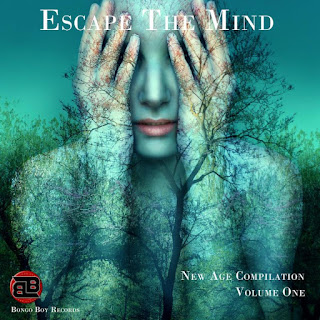 What the Critics are saying:

NEW AGE music is often instrumental in nature, incorporating elements of electronica and non-Western instrumentation. It is characterized by the light melodic harmonies and sounds reproduced from the natural world. It is intended to promote serenity, create artistic inspiration, and relaxation. Used by listeners for yoga massage, and meditation, it is often associated with environmentalism and New Age spirituality.
Starting things on a blissful tone is the radiant hues of Robert Slap’s “Healing Temple”. With such tenderness, the way the song unfolds gives it a naturalistic feeling. Completely wordless, the song represents a neat intersection between the electronic and the acoustic.
A distinctly 80's neon enters the sound on Robert Slap’s laid-back “Sahara”. With many layers working in unison the song teems with life. Synthesizer is used with the utmost of grace as the song takes on a distinctly beachy approach.
SKOPE Magazine - 05.01.2017
----------------------------------

"Sun kissed and sweltering in the heat, we make our way to the global bop of Sahara. This track has a real world music feel to it, but a sense of cross genres, once more the tempo is quick, but while the percussion adds the rhythm, the keyboards create an almost calming oasis of sound, this is one really delightful
track to enjoy and was a pleasure to listen to, I adore the smooth Jazz genre, but here Robert Slap crossed boundaries to make something good, brilliant, by adding the global world feel, and mixing in a little new age magic, sheer genius.
Let us now relax within the realm of the Healing Temple. This was one of my favorite compositions, a real sense of ambiance can be found here, but in this superb composition, the slight change and usage of vocals carries us into an almost mystical journey of inner peace, using just about every trick in the book, hand claps, crescendos and some wonderful percussion, partnered with some very classy synths and then a hint of electric guitar, you not only have something quite clever, but almost in arrangement bordering on soft progressive rock track, a truly brilliant piece indeed. I would recommend this album any day of the week; you cannot get enough of music of this quality into your collection.
Steve Sheppard - One World Music
------------------------------------------------

"One of the many things I like about Robert’s music is the way he adds dashes of world music influences into his jazzy compositions – just enough to provide a bit of exotic flavor without it trying to be an authentic indigenous sound. A few examples are “Sahara,” whose inspiration can be guessed from the title. I loved the intertwining roots of Robert’s guitar styles, which incorporated jazz, rock, fusion, ambient electronic, and world music. And I was as impressed with Robert’s flair for composition and arranging, as I was with his impeccable guitar playing.
According to Robert, the subject of a song called “Healing Temple” is described as, “the spiritual center of Atlantis, and it is believed the “OM” (highest spiritual sound of the universe) was first heard here.  This is one of the longer pieces on the album and I liked the way it flowed through various movements. It also featured something I had been waiting for – a taste of Robert’s exquisite guitar work, which he has been well known for over the years. His tasteful acoustic guitar lead was the highlight of the song for me.
Michael Diamond - Music and Media Focus
----------------------------------------------------------

Robert Slap is a perfect melodist. The compositions of the album are listened to in one breath. This project of the artist is a perfect example of that new age music which conquered the whole world. His electronic keyboards are filled with various nuances, and aerial voices are delicately coloring the palette of the album.
One important feature of the music of Robert Slap is that it has an inner power and a great passion. It immediately arouses an emotional response from the listener because these tunes come from the depths of the artist’s heart.
Serge Kozlovsky
-----------------------

The biggest draw for me is the piece that pulled me back in, “Healing Temple.” It slips in on a bass drone and echoing, crystalline tones. Acoustic guitar and flute take the forefront; the flute here is snaky and lithe. Midway through, Slap lays down a guitar solo against a slow-moving backdrop of pads and sharp percussion. I honestly wish more of this style of playing had found its way into the mix.
John Shanahan -  Hypnagogue